We inform you that to improve your browsing experience, manage the contents of your basket, offer you our personalized advice, and inform you online of our offers, our website uses cookies and storage of IP addresses.
We want to inform you clearly and precisely about the cookies we use: what is a cookie, what is it for, what types of cookies we use, what are its purpose and how you can configure or disable them if you wish. In this link you can expand information about our Cookies Policy.

Development of software applications for the outdoor geometric definition based on 3D scanning techniques and digital photogrammetry.

Development of software applications for the outdoor geometric definition based on 3D scanning techniques and digital photogrammetry.

Mid-range scanning is a system increasingly used in public works as a substitute for complex surveying studies. This system has multiple advantages, as it provides more data volume, more accurately and in less time. The software used shows that viewing large point clouds can pose performance problems, they do not offer advanced filtering methods and none of them manage to solve the problem of generating a coherent and error-free mesh of triangles.

The objective of this project is to create a series of computer applications that reduce the time of manual editing in order to create three-dimensional models, by combining the technologies of processing points with laser scanner and terrestrial photogrammetry. The ultimate goal is to build a software tool that gives an exact representation of the scanned surface and calculation of theoretical and real sections as well as the comparison between both, in external scenarios.

Finally, the stereoscopic vision of pairs of images was implemented using graphics cards with quad-buffer, high frequency monitor and active glasses, useful for orientation and restitution and the restitution on pairs of images oriented in mono or stereo mode. 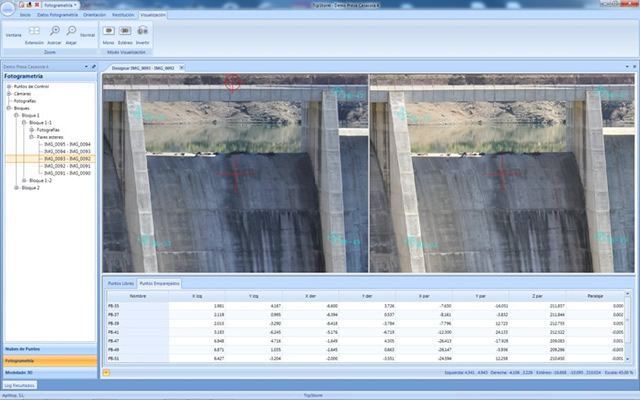 APLITOP S.L. has been a beneficiary of the European Regional Development Fund whose objective is to improve the use and quality of information and communication technologies and access to them and thanks to which it has optimized our commercial processes for the improvement of competitiveness and productivity of the company 2022. For this, it has had the support of the INNOCAMARA PROGRAM of the Chamber of Commerce of Malaga. "A way of making Europe".